I feel like I’ve had some pretty good luck with sex toys this year, which is almost surprising since I’ve mostly been testing products from lesser-known brands, rather than the usual big industry players. It’s taught me to not judge a book by its cover, or in this case a sex toy by its manufacturer’s reputation, or lack thereof. On that note, today’s review is on the Adorime Rabbit, a G-Spot and clitoral vibrator with two motors for dual stimulation. I hadn’t heard of Adorime previously to them contacting me, but they’ve actually been manufacturing products in China since 2015, and have since signed on as one of my blog’s sponsors! I’ve really enjoyed working alongside their company during this time, and so was eager to also try out one of their products for the blog. They offered to send me their popular rabbit vibe, which I was more than happy to accept.

Adorime are a Chinese manufacturer of pretty much every type of sex toy you can think of. From Ben Wa Balls to realistic masturbators and dildos, Adorime have likely got whatever you want covered. While they do have their own website, their actual stock is sold through Amazon. This is a bit of a shame since I always encourage my readers to not shop through Amazon, but as long as you make sure you are buying from Adorime’s official Amazon store then you should be in good hands. They also run a tester program for those in the US, in which they give away free samples of their toys in exchange for honest reviews. You can find out more about this and sign up here. 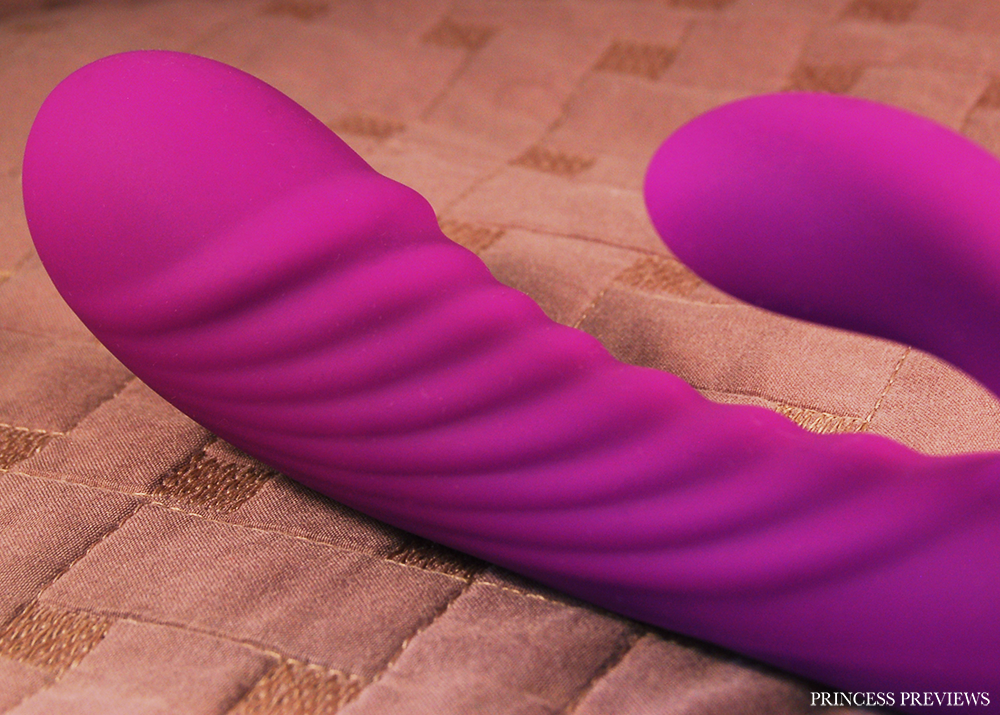 As soon as I first held this toy in my hands I had a big concern. Most of this toy is firm, in the way that all silicone toys that have motors and electronics inside of them are. But then the area at the start of both arms is completely hollow, making them very flexible. I took a video to show what I mean here, and this is also advertised on Adorime’s product listing (at first I wondered if it was a mistake). Now, I have mixed thoughts about this. Rabbit vibrators are notorious for not being flexible or versatile enough to work for a lot of people’s bodies. By making the two arms flexible, Adorime are trying to allow the toy to work for more people, which is brilliant. But, typically G-Spot toys need to have some firmness to their material so that they can create enough of a ‘hook’ to properly reach and then stimulate the G-Spot, which is why hard materials such as metal and glass usually are the most effective. Plus I have a particularly troublesome G-Spot, so as you’d imagine this feature made me pretty concerned as to whether I would actually be able to stimulate my G-Spot with this toy. I do, however, think it is a great idea for the clitoral arm, as I often find the firmness of these uncomfortable, and so a more flexible version presumably should work well. 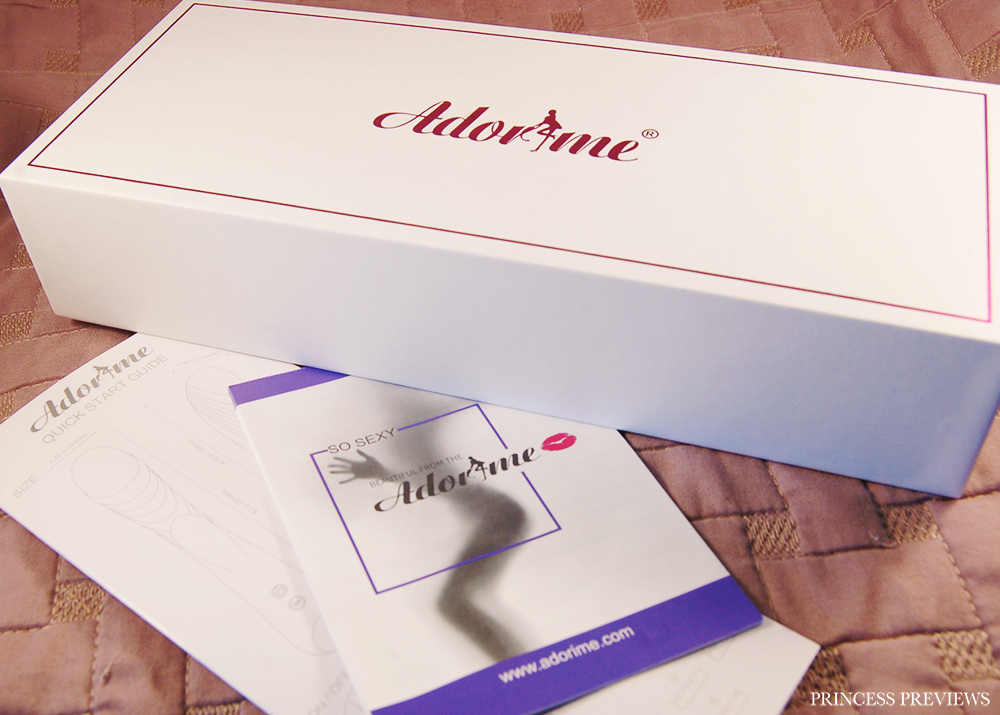 My order for the Adorime Rabbit was made on the 29th of September and I received it on the 12th of October. It came in a plain cardboard box which didn’t mention the company name, although the product inside was listed on the box as ‘Vibrator’, which may be a big issue if privacy is important to you. The actual product box is a very simple white cardboard box, with its only features being the company logo and a border. This means it’s pretty discreet, so as long as no one Googles ‘Adorime’ you should be able to store your toy in this without much worry. Inside of this is then the toy, a grey drawstring storage bag, the USB charging cord, the instruction manual, and a booklet on the warranty and other information about Adorime.

Charging the Adorime Rabbit is easy since it is USB rechargeable. Just plug the USB end of the charger into a USB port, and the other end into the back of the toy. When charging the LED light at the bottom should flash, and once finished this light will become steady. It should take 2 hours to fully charge the product, which should then give you 1.5 hours of play time.

The controls for this toy certainly aren’t intuitive, and it took a bit of going over the instructions for me to learn, but once I got the hang of them I didn’t really have any issues. Basically there are two buttons, a button with the ‘power’ symbol and another with the ‘vibrations’ symbol. To turn on the toy you hold down the ‘power’ button for three seconds, and this will then turn on the LED light indicating that the toy is in stand-by mode. You can then press the ‘vibrations’ button to cycle through the 9 vibration modes of the internal arm, 3 of which are steady speeds and 6 of which are pattern modes. At any time you can also then press the ‘power’ button again, which will then turn on the clitoral arm of the toy, and this features the same 9 vibration modes. You can use the motors of the two arms either separately or together, and can have them on completely different vibration settings. This versatilely is a pretty awesome and makes it feel like you can really customise the toy to get exactly what you want. If I had any criticism though I think a third button for the clitoral arm would be better, rather than using the ‘power’ button for it, as this can be a little confusing at first. Also worth noting is that the LED light on the toy changes colour every time you put it on a new vibration mode. This can look really cool, especially when using the product in a dark room.

The motor for the internal arm of the toy is pretty good, and I find the vibrations rumbly and fairly powerful. The vibrations on the clitoral arm, however, are a different matter. I find them incredibly buzzy and lacking depth, so even though they can go quite high I don’t find them able to stimulate me very well. This is a real shame, as I would much rather have a good clitoral motor than an internal one.

The Adorime Rabbit isn’t whisper-quiet like its product page states, but it is fairly low in volume. I would probably be concerned about using it if I had a reason to be super quiet, but otherwise behind closed doors I doubt anyone would hear you using this unless they were purposefully listening. 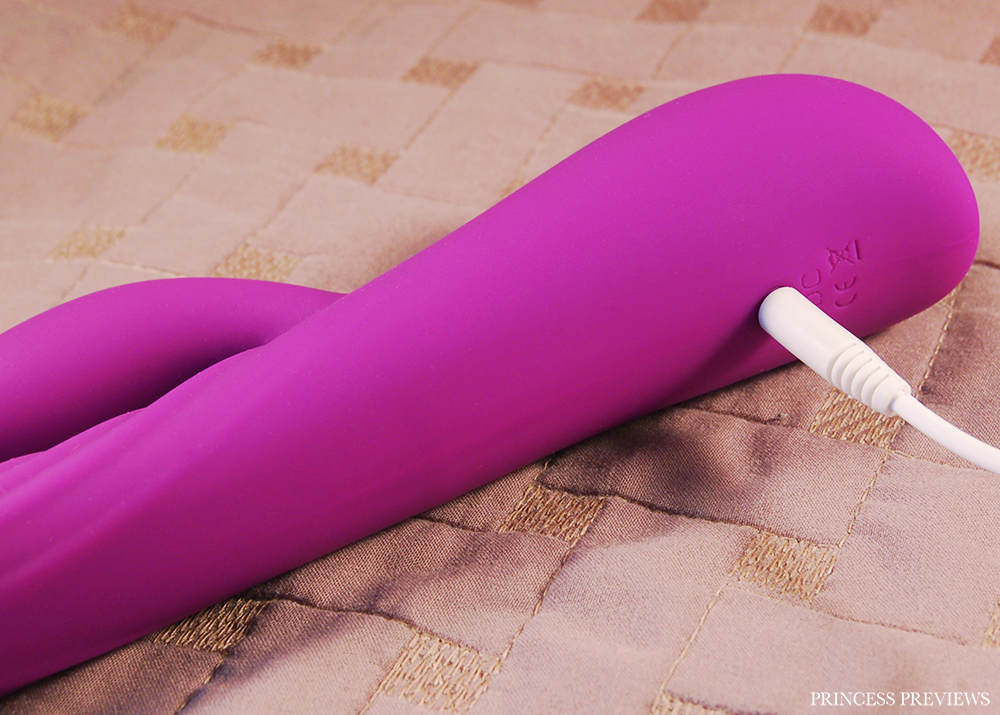 Due to its thin size inserting this toy is very easy and requires no prior warming up. The ridges around the internal arm provide some stimulation, but overall I find them too subtle to make a big difference. I find the clitoral arm sits nicely on my clit, but this is definitely aided by the flexibility of the arm. This is only my second dual stimulation vibrator with this traditional rabbit shape, and I found the firm clitoral arm on my previous one, the Vibease Esthesia, to be incredibly uncomfortable. So I love the flexibility this one offers. I don’t find it restrictive or uncomfortable at all, and if I don’t feel like using the clitoral arm I can even push it back so it’s completely out of the way.

Unfortunately, however, my worries about the flexibility of the internal arm were confirmed, as I’ve found that this toy cannot stimulate my G-Spot at all. For any toy to stimulate my G-Spot it needs to be held at a certain angle and I have to apply a fair amount of pressure. But with this toy it doesn’t matter how I hold the handle, because the empty space inside the toy just means the handle bends while the arm itself stays put. I can thrust the toy in and out and that’s about it, no angles or pressure can be achieved through movement of the handle. This is a real disappointment, as the shape of the G-Spot arm is almost exactly the same as the Paloqueth G-Spot Vibrator, which I loved, meaning I know this shape works with my body. But rather than the extra flexibility in the internal arm making it more versatile, it instead makes it pretty much useless.

Since there isn’t much to the internal arm and it isn’t long enough to reach my A-Spot, I don’t find it particularly pleasurable just to thrust with, plus the internal vibrations felt a little useless when not applied to my G-Spot. Then, since I found the clitoral arm’s vibrations to be very buzzy, this was also very difficult to be stimulated by. Despite all my issues however I do find pleasure when using this toy and I can orgasm fairly easily with it. It shouldn’t work, but kinda does. I think if you have the type of clitoris that likes buzzy vibes, or if you enjoy simply thrusting with dildos rather than stimulation on a particular spot, this would work well for you. 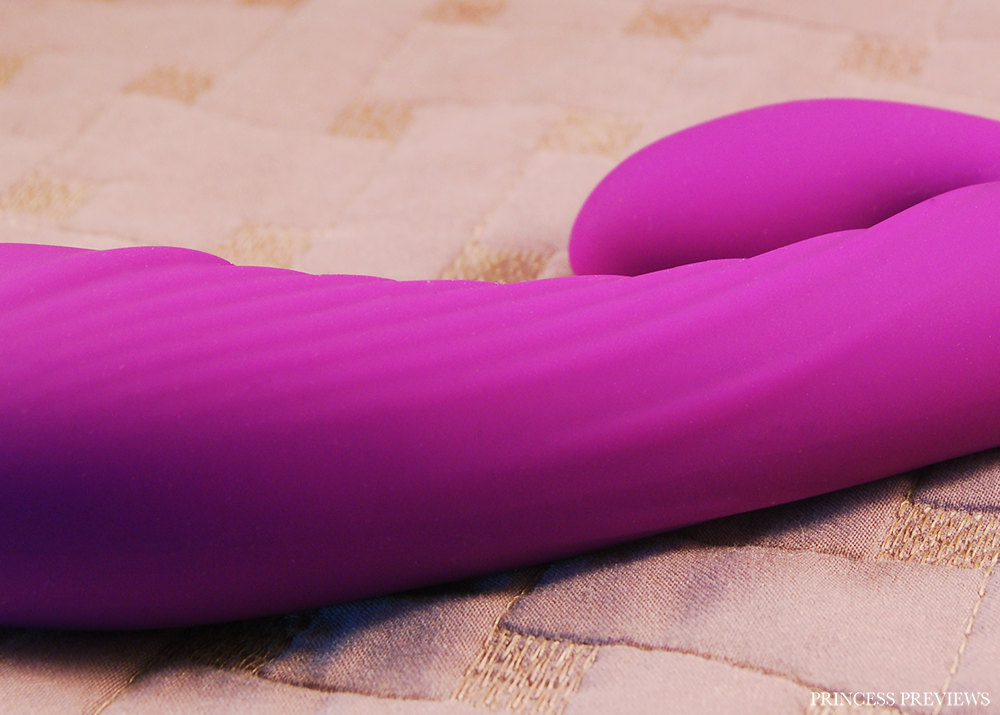 Since the toy is fully waterproof and made of body-safe silicone, cleaning it is super easy. Just wipe it down with some warm soapy water, rinse it, and leave to air dry. It can then be returned to its provided storage bag. Ensure you only use water-based lubricants with this or perform a spot test prior to using alternatives.

Overall I do feel quite disappointed by the Adorime Rabbit Vibrator. I can understand what they were thinking with making the two arms flexible, and I think it totally works for the clitoral arm. It makes it way more versatile and comfortable, and should be able to suit far more people than if it was firm. But unfortunately it completely backfired when applied to the internal arm, as it meant it wasn’t able to be angled enough to actually reach the G-Spot. Now, I have a difficult G-Spot, so perhaps this would work for you, but I do believe at least some form of angle generally needs to be applied to the toy during G-Spot stimulation. Thankfully this seems like a relatively easy fix for Adorime, as they just need to fill in the hollow hole at the start of the internal arm. I do think an improved motor to the clitoral arm is also necessary, but if I could at least stimulate my G-Spot with this toy then I don’t think this would bother me as much.